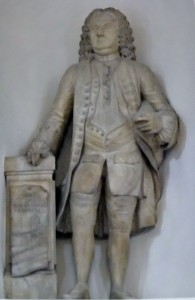 Master of Ceremonies and legendary gambler and socialite. His strict code of etiquette and his phenomenal role attracting people to the city suggests that he was one of the most influential men in the social history of England.

You can still see his house in Sawclose, and the sedan chair houses in Queen’s Parade Place.

Beau Nash’s statue in the Pump Room looks down on the social scene he so benevolently ruled.